In this post, we use some fairly new technology of time series analysis namely neural nets and interactive charting tools. These techniques are the state of the art. The dataset we use for this example has: missing data, outliers, poor formatting. The dataset i about restaurant at a campsite that is open whole year. There is a peak season in summer, and so we aspect to have seasonal data and trend might be present. The data are the revenue by month in USD, that range from January 1997 to December 2016.

We start CLEANING THE DATA. Fairly often this is the pat that takes the most time. We start removing the quotes, convert the data in time series format, detecting and replacing missing data and outliers.

As we can see from the result above we have 4 missing values. Furthermore, it is quite important to realise that we have a monthy revenue which is around 10000 (1st Quartile) to 30000 USD (3rd Quartile). But interestingly, there is a minimum of 3 USD and a maximum of over 3 million UDS. This makes no sense at all, and this says to us we are in presence of outliers. How do we tackle the outliers problem? We have to detacts thse observations and replaces them with a linear interpolation. 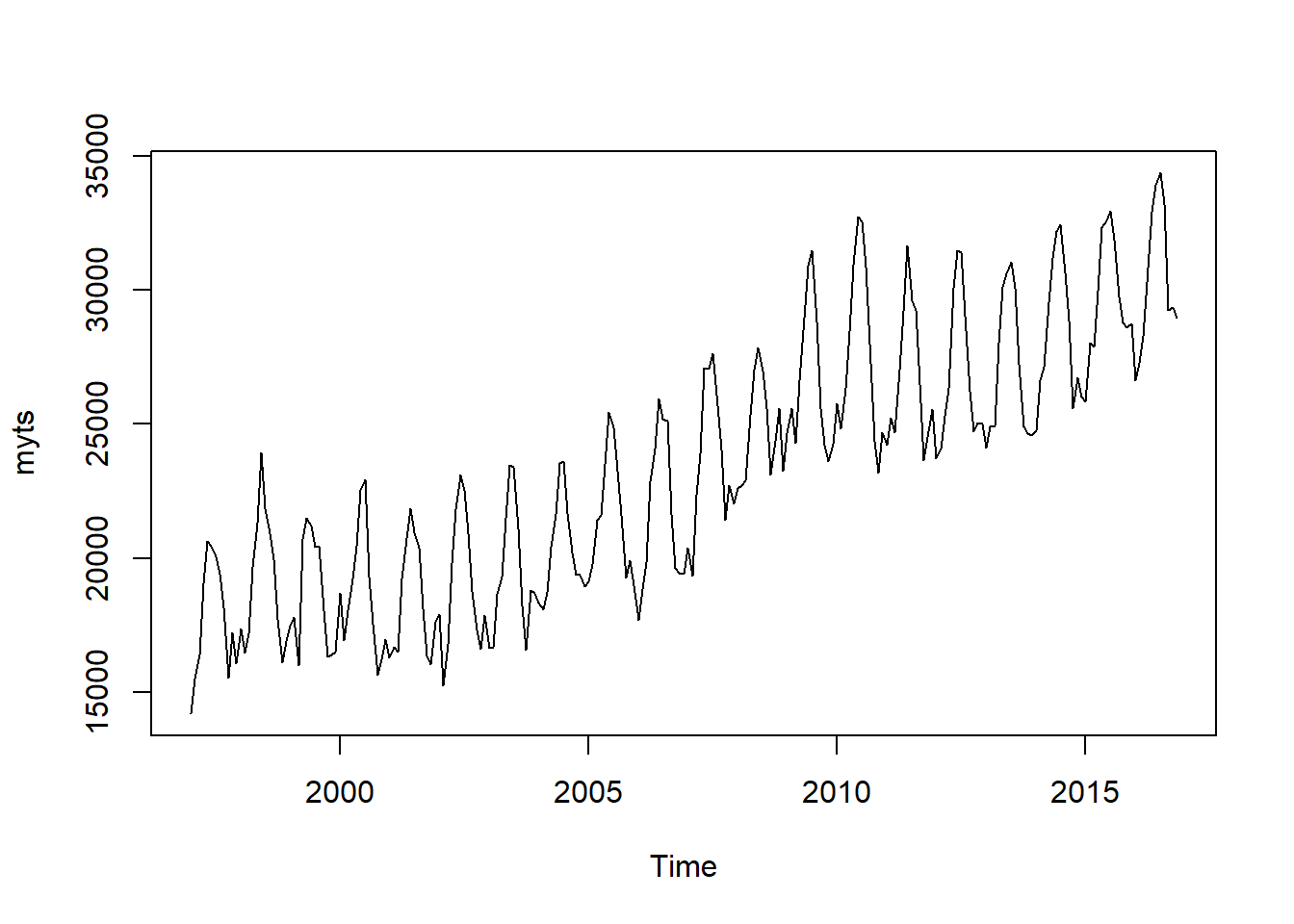 Looking from the summary here above, we see that now the range of revenue is from 14209 to 34366, and we have not missing values. The graph also confirm that the all the values now are plausible and the data are clearly seasonal, and there is also an upper-trend. The model has to be able to catch all of these patterns.

NEURAL NETWORKS Neural Networks are the new in tme seires analysis. In most of the cases NN has hidden layer which is an intermediary layer between the input and the output, and is called Feedforward Network. For NN in time series analysis is called Neural Network Autoregressive Model, NNAR. Like for the ARIMA model there is a specific notation :

The p values are used as inputs, k nodes are present in the hidden layer. Looking at the figure above, tha means we have 24 lags as input combines to 8 nodes in the hidden layer. When the data are seasonal the NNAR model is more complicated and we have to introduce the P parameter that denotes the seasonal lag. Usually P is equal to one, which means that the preavious observation from the last season is also included in the model. 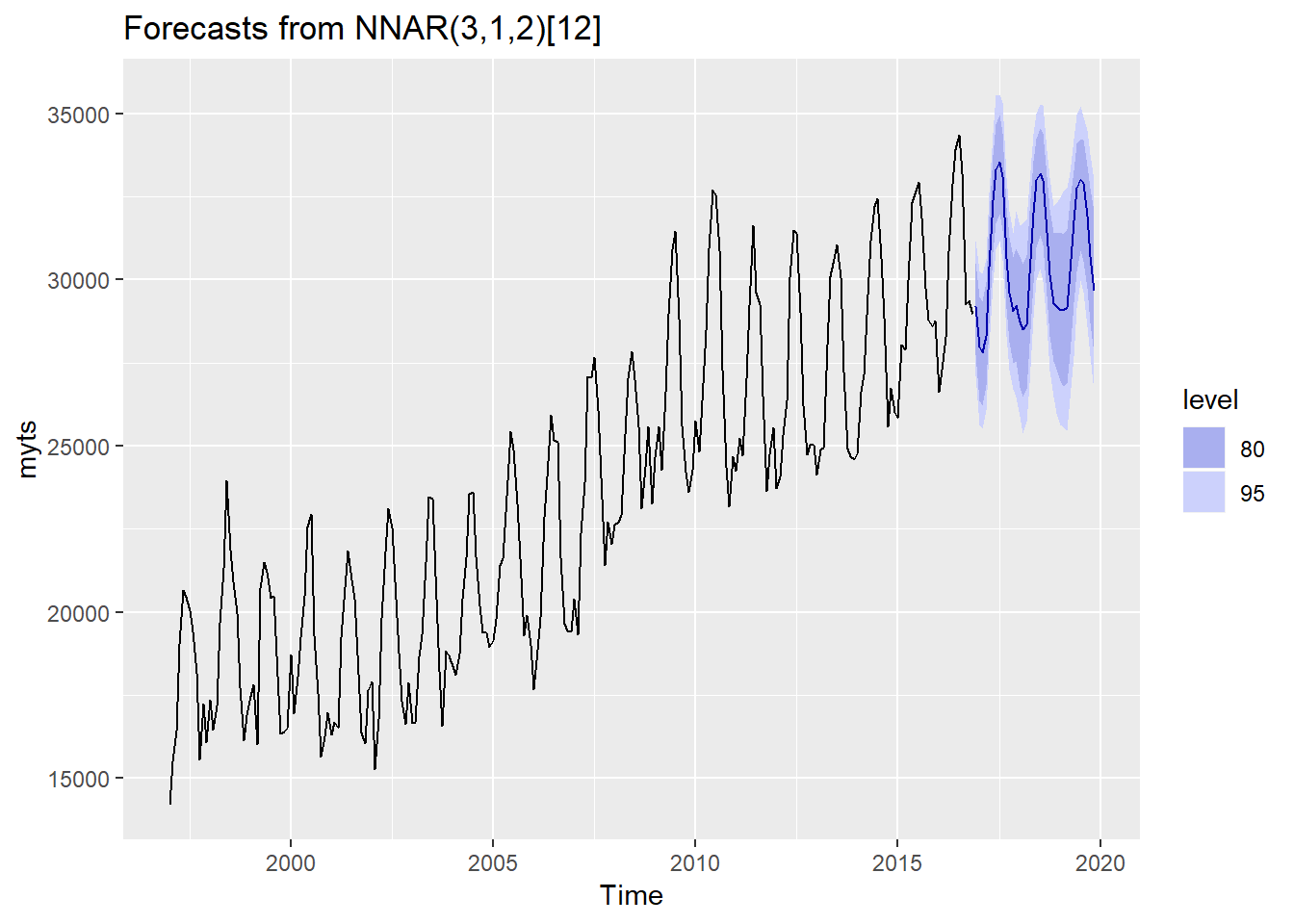 The model recognizes that there is a seasonal pattern (the summer get much revenue than the winter does). Interestingly, the yearly peacks (summer) of the forecast stay at an even level in the three years forecast, but below (winter) are ascending. The parameter order of the Neural Network Autoregressive Model is: NNAR(3,1,2)[12]. This means the NNAR uses the first three observations as the input, plus one observation of the last seasonal cycle. The seasonal cycle is an yearly one [12]. Essentially, there are four input values and these are compressed into two nodes in the hidden layer.

The Interactive graph above consists in two distinct fractions. The longer line at the beginning is the original data. The second part which is 36 months long gets activated as soon as we hover it, and this is the forecasting with prediction intervals. At the bottom we have an interactive range selector where we can specify the level of zoom in and out in the timeline.